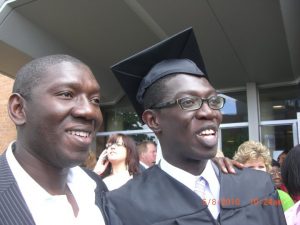 I was sitting with my best friend (my now fiance) while she worked on her budget. As I scrolled through Instagram she asked me, “How much debt do you have?” I replied  “I don’t know, maybe $35K”.  The reality was up to then I didn’t like thinking about what I owed, nor did I ever want to come face to face with the stark reality of my financial situation. So for a while, I’d pay $20 to $100 on my loans. I wasn’t even covering the interest. I’d avoid Mohela’s (student loan service) calls, and sometimes they’d call me from different numbers. After I paid off my debt I made a promise to myself that I’d never avoid debt collection calls.

April 28 2013 the day before my birthday, I lost my job. For the first time since graduating from college, I didn’t have a title. Well my title was unemployed but I didn’t like that. A week later I learned the woman that adopted me passed away from a long battle with cancer. I couldn’t afford a plane ticket to my mothers funeral.

It took me almost six months before I found another job. Those months without a job were dark and often lonely. Living in Atlanta, I dreaded when someone would ask me “so what do you do”? I must have applied for over three hundred jobs easily which yielded a few callbacks all the while my debt was accumulating interest to my detriment. Mohela would call several times a day, and once a week I’d answer the debt collection calls and defer my payments. It wasn’t until December of 2016 when I had gainful employment and got back on my feet, I started chipping away at my debt, and most notably, my lifestyle changed.

Being from Ghana it was easy but I ate rice with stew, smoothies, and oatmeal for several months. I had laser-like intensity when I got serious about eliminating my debt. Full disclosure I did not have a car payment. I drove Acura, a 2003 Acura TL that gave me fits but she fought until her last days. At the time, I was working in insurance sales and would throw every bonus at my debt, and I became the aggressor. My loans were set up in sequential order, and some sequences had higher interest loans than others. I decided to start paying off those loans first. After procrastinating for days, I called Mohela and inquired about my per-diem and loan balance.  Some of loans gained $3 a day meaning over a year without payment I could accrue $1,095

Personal finance was my life. On my birthday, four May 1, 2017, six years, 11 months, 2,551 days, 3,673,440 minutes, 220,406,400 seconds after walking across the stage to receive my collegiate diploma I was debt-free. Luckily I kept credit card usage low by using cash for most purchases outside of travel and have always driven cars that were cash purchases. Like my high school teachers used to tell me, it’s always easier to get an A than to keep it. The point is as difficult as it was paying off my debt, keeping it off has been equally challenging. Although it’s been two years, personal finance is part of my life’s work to help others too see past the forest of debt. It’s been over a year, and I’m glad to say that I am still debt-free, but the next chapter is inspiring a generation to live debt-free. Welcome to the 400 LB Elephant

7 Tips on Navigating Unemployment Due to COVID

Three Simple Ways to Save Money In The Current Economy